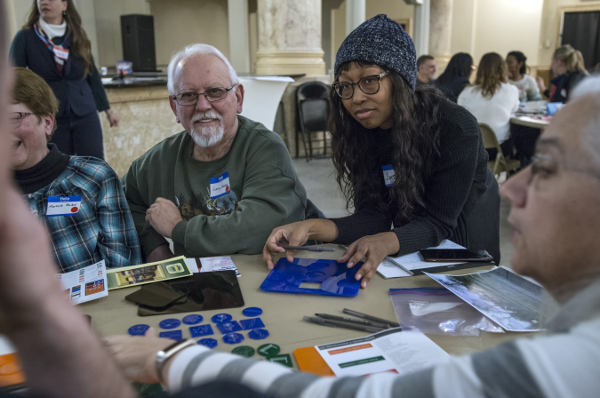 “I have seen and have played a part in my neighborhood developing into a family-friendly place where neighbors know each other and have a vested interest in the neighborhood.  We voice our concerns and address issues and the result is that more families have moved in. It’s such a nice feeling to see children playing in the streets, ride bikes, people walk their pets. We have a lot more challenges to overcome, but the neighborhood is the place we call our home!”
— Joelle Gamble, resident of the Aetna neighborhood in Gary, Indiana

Gary, Indiana is situated in the heart of the globally rare dunes on the southern end of Lake Michigan, about 25 miles from downtown Chicago and just west of the Indiana Dunes National Lakeshore. Two low-banked rivers flow through the city before emptying into Lake Michigan. Within the city limits are nature preserves and parks where we can find unique plants and creatures like the blue spotted salamander. Gary has some amazing assets.

But the people of Gary are the city’s strongest assets. Sometimes called The Steel City, Gary was founded by U.S. Steel Corporation in the early 1900’s and developed on drained wetlands. Gary, along with Memphis and Chicago, was the end of the line for many African Americans during the Great Migration. Its jazz and blues scene was inseparable from Chicago’s, and many legendary artists preceded the Jackson Five as important artists who came out of Gary. Today, the people of Gary are committed to their city. Like Joelle, many residents put time and care into figuring out how to make it even better.

Like many Great Lakes legacy cities, Gary has a rich culture and history but faces major challenges that all too often come with deindustrialization and disinvestment. At the Alliance for the Great Lakes, we know that our region’s cities have a direct impact on the health of the Great Lakes, and the health of the lakes has a direct impact on the cities.  We believe that everyone in the Great Lakes region should benefit from safe, clean water and all that the lakes have to offer. Unfortunately, this has not always been the case in Gary.

Gary’s combined sewer and stormwater infrastructure was never really adequate to handle heavy rainfall on this naturally wet city. In fact, the past several years have been particularly disastrous — Gary has recorded unprecedented precipitation and flooding, which has led to substantial property damage and frequent combined sewer overflows.

To complicate matters, social and economic forces have led Gary’s population to plummet to about 80,000 residents, just 45% of its 1960s peak population. The remaining residents of Gary, while committed, are not equipped to pay for the needed updates to the city’s expansive and aging stormwater infrastructure. The median household income in Gary is just $28,020, with households in many areas of the city hovering just above $10,000.

From wastewater management to neighborhood stabilization, these issues require creative, collaborative solutions. The City of Gary has put together an aggressive strategy to begin addressing both issues. One piece of the plan is the adoption of the Vacant-to-Vibrant program, which uses green infrastructure to transform vacant lots into pocket parks. Over the past year, we’ve partnered with the city to scale up the program in all six of its districts, with residents at the helm.

At the Alliance, we work full-time to protect Great Lakes water and communities, but we know that no one knows their community, their piece of the shore, better than residents themselves. So, we focus on elevating the expertise and excitement that residents bring to revitalizing their neighborhood. We team up with local groups to knock on doors, get the word out at community events and host meetings where residents decide where to install a pocket park and what form it should take.

Leading up to the Vacant-to-Vibrant scale-up, the city used the federal Hardest Hit Fund to prepare potential sites. They demolished abandoned buildings and replaced six feet of topsoil. Last summer, we held an open, citywide meeting at which residents discussed how vacant properties might be transformed into vibrant, lot-sized parks that beautify their neighborhoods. People gathered around maps of their neighborhoods, considered the sites the city had prepared, and decided with their neighbors where the parks should go. This month, residents, city officials, and landscape architects reconvened to design the sites. The city will begin building the new parks this fall.

Looking ahead to a greener future

Even a small project, on just one lot, can have a positive impact on a neighborhood. In fact the benefits are manifold: residents taking ownership over their own neighborhood; grassroots involvement in municipal decision making; improved relationship between residents and their local government; neighborhood beautification; higher property values and neighborhood stabilization; green infrastructure to soak up extra water and ease the burden on the city’s struggling system. The list goes on.

These projects are small but scalable. As the city scales up the Vacant-to-Vibrant approach, Gary has an exciting opportunity to amplify these important gains. With strong partnerships and the development of grassroots leadership throughout the process, the transformative effect of green infrastructure efforts can extend beyond plots of land and make a lasting impact on the lives of residents and cities they call home.