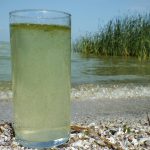 On August 2nd, 2014, residents of Toledo, Ohio awoke to urgent warnings not to drink or use their tap water. Half a million people were unable to drink their water, cook with it, or brush their teeth. The cause? Toxins from a harmful algal bloom growing in Lake Erie.

Right now, a bloom is forming on the surface of Lake Erie, and the algae continues to come back year after year. We went to Toledo to talk to communities on the front lines about the 2014 crisis and its aftermath.

“It stinks. The best thing I can think to describe it is if you remember Grandma’s basement, that musty smell,” said Dave Spangler, president of the Lake Erie Charter Boat Association, describing the blanket of algae that covers western Lake Erie each year. “It gets so thick that it slows the boats.”

Five years ago, toxins from an algal bloom got into the drinking water systems of Toledo, Ohio. On August 2nd, more than half a million Toledo residents were ordered not to drink or even touch their water. The order lasted for nearly three days. A few weeks later, residents of Pelee Island, Ontario faced a similar crisis lasting nearly two weeks.

For many in Toledo, this year’s algal bloom forecast stirred up memories of the 2014 water crisis and fresh anxieties about their water.

No one living in a Great Lakes city should have to anxiously wonder if their tap water is safe to drink. But every summer, that’s the reality for millions of people living along Lake Erie.

Rebuilding Trust at the Tap

“You’re telling people, don’t drink the water. Don’t even touch it,” said John C. Jones, community liaison for ProMedica health system, as he recalled the 2014 water crisis. “Don’t drink is one thing, but being told you can’t touch the water brings a whole other level to this.”

The 2014 water crisis had both personal and professional impacts for Jones.

The first day, he drove hours to find water. Jones was able to get water for his family and elderly parents. And while he helped with his church’s effort to distribute cases of water to seniors and low-income congregants, communicating to the broader Toledo community proved challenging.

“Some people were like, ‘Nah, it isn’t real. It’s just the city, they don’t know what they’re doing,’” Jones said, explaining the range of perspectives in the community. “To people at the other extreme, it was like, ‘This is life and death right now.’”

Jones explained the challenge of messaging to the public during the crisis, “So you’re trying to manage the panic, but you’re also trying to make people be non-apathetic.”

Jones acknowledged the current effort by the community and environmentalists to address the root causes of algal blooms. Yet he emphasized that the work won’t be done until people can trust the water coming out of their taps.

“I don’t think this movement is moving fast as it should to provide assurance clean water will be provided going forward,” Jones said.

“The fish will move somewhere else because there’s less oxygen in the water,” said Spangler. Harmful algal blooms aren’t just unsightly, they deplete oxygen in the water, causing dead zones that can’t support life. “And when people see the big blooms, folks decide, ‘I’m going to take my vacation some other place.’”

Spangler has been to the state capitol many times to emphasize the human and economic impacts of this perennial problem.

“There’s a family over there that cleans fish for a fee,” he said, and pointed to a red truck parked near the entry to his marina. “If fewer people are fishing, and no one is catching fish, they have to find another way to pay their bills and feed their children.”

Bringing the Community Together for Clean Water

Junction Coalition is a Toledo-based community organization focused on economic, social, and environmental justice. On the first day of the 2014 water crisis, Junction staff went door to door, warning people not to drink the water.

“On the second day of the crisis, they brought in the National Guard to deliver water,” recalled Alexis Smith, restorative justice director at Junction Coalition, as she reflected on the scale of the panic and the price gouging that took place as water became harder and harder to find on store shelves.

Today, a lot of the young people and families Smith works with remain skeptical about the water, “I know a lot of people who still don’t drink from the tap.”

Since the 2014 water crisis, the group has focused on bringing young people and residents together around clean water and food security.

In the wake of the water crisis, caused by agricultural run-off pollution, Junction Coalition takes extra care to design green spaces. Junction Coalition has started community gardens that give neighbors a greater sense of control over their food and water.

“We’re not waiting for anyone to be our superhero.” said Alicia Smith, director of Junction Coalition. “We’ll be our own heroes.”

Smith walked through Junction Coalition’s garden, which sits adjacent to her property, where young people from the neighborhood help plant and care for vegetables. She pointed out different crops and stressed that not only can neighbors grow and harvest their own food. Ultimately, farming practices use by large-scale agriculture are at the root of the algal bloom problem. The gardens spark conversation among residents about agriculture and clean water, and what a sustainable future might look like.

Junction Coalition’s work in the Toledo community is invaluable. But, as Alicia Smith noted, it’s going to take concrete action by the state and real accountability to reduce runoff pollution and protect clean water.

“We are the ‘public’ in ‘public health,’” Smith said, emphasizing that it is the state’s responsibility to protect clean drinking water. “Where’s the guarantee that this won’t happen again?”

Harmful algal blooms are not a mystery. We know the problem is agricultural runoff. And we know there are solutions that can benefit both farmers and the communities that depend on Lake Erie.

Tell the governments of Ohio, Michigan, and Ontario to act now and ensure real accountability for a clean Lake Erie.