Lee Botts, our founder and a force in creating and nurturing the Great Lakes environmental movement, passed away on October 5th at age 91 in Oak Park, Illinois. Her voice for the lakes was larger than life and will be missed. 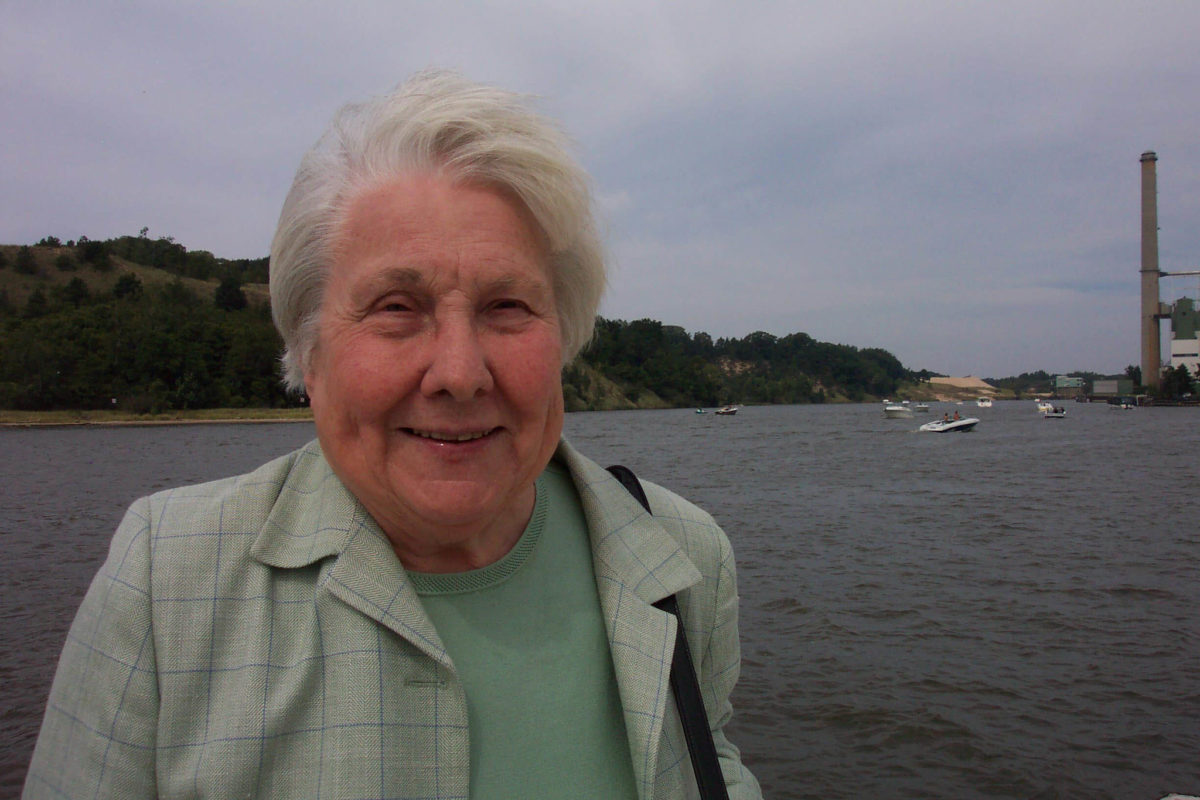 Lee was a leader without precedent in the modern movement to protect the Great Lakes. Lee served in numerous municipal, federal, and academic positions. She was instrumental in advocating for a wide range of laws and regulations that protect the lakes, laying the groundwork for today’s Great Lakes movement.

A magazine published by the US Environmental Protection Agency in 1975 described Lee as the “Lady of the Lake”, a deserving title. While she fought fearlessly for the lakes, she is remembered as someone who led with kindness, focused on bringing people together for a common cause.

Always passionate about the outdoors, her Great Lakes advocacy work took off through her involvement in the campaign to create the Indiana Dunes National Lakeshore, which today is the Indiana Dunes National Park. Near the end of that campaign, she was hired by one of Chicago’s first environmental organizations, the Open Lands Project (known today as Openlands), where she helped develop the first Earth Day in 1970.

The Lake Michigan Federation, the first regional environmental group in the Great Lakes, grew out of her work at the Open Lands Project. Today the group is known as the Alliance for the Great Lakes. The Federation was formed in 1970 and she served as the organization’s first leader.

Among many successes during her tenure with the Federation was the campaign to ban phosphates in detergent, a major pollutant of our waterways. Her efforts led Chicago, under Mayor Richard J. Daley, to become the first Great Lakes city to adopt a ban. A New York Times article about the issue noted, “When that [the phosphate ban] happens, state and Federal environmentalists believe, a major step will have been taken toward slowing not only Erie’s decline, but that of the Great Lakes generally.”

The list of Lee’s accomplishments is long. She was a leader in the campaign to enact the Clean Water Act. She was director of the Great Lakes Basin Commission under President Carter and a vital champion of the Great Lakes Water Quality Agreement, the binational agreement familiar Great Lakers now but was a pioneering idea at the time.

After leaving the US EPA, she was a researcher at Northwestern University’s Center for Urban Affairs and Policy Research, where she helped organize the binational citizens’ coalition Great Lakes United. She was a consultant to the National Research Council for a study of toxic contamination of the Great Lakes by the National Academy of Sciences. And, in 1987 Chicago Mayor Harold Washington appointed her the head of the City of Chicago’s first environmental agency.

Due to her work, Lee later became a consultant and advisor to new citizens’ groups being organized in the 1990s far beyond the Great Lakes. In this role she travelled to Russia, Ukraine, Estonia, and Mexico.

Elizabeth Botts, Lee’s daughter, was quoted in the New York Times saying: “Lee Botts was an environmentalist before the environmental movement had a name.”

In a Chicago Tribune profile from 1994, Lee explains her fascination with the lakes saying: “People ask me why I’m hung up on the Great Lakes. I was a child of the Dust Bowl. Coming here from Oklahoma in the ’50s, I couldn’t get over the marvel of a lake that wasn’t made by the Army Corps of Engineers.” (Earth Mothers, April 17, 1994)

Environmental education inspired Lee throughout her life, and her advocacy for the Indiana Dunes Environmental Learning Center showed her passion. “People need to know about where they live and care about it,” she is quoted in a Chicago Reader feature profiling the Center (Where the Wild Things Are, March 2000). She helped found the Center in 1997, connecting the lakes to generations of young people. The Center provides thousands of youth with hands-on outdoor education experiences each year through programs at their camp nestled among the Indiana Dunes National Park.

Another legacy of the Center’s founding was the unusual story of business and environmental groups coming together to create it. The Reader observes, “the most startling lesson of the Environmental Learning Center is the fact that it exists at all. It’s a business-environmentalist partnership.” The sectors were often at odds in northwestern Indiana, yet they worked together on both fundraising and policy for the Center. That profitable businesses must walk hand-in-hand with Great Lakes protection is a legacy of the Center’s founding, another remarkable campaign led by Lee that continues to make a generational mark on our region.

Several years ago, the Alliance for the Great Lakes named its endowment after Lee. It is now known as the Lee Botts Legacy Fund. Her legacy continues to allow us to sustain our work, and the precious Great Lakes themselves. For that, and for so much more, we are all deeply indebted and thankful that Lee chose to share so much of herself with the Great Lakes.