From the primordial sea lamprey to the tiny zebra mussel to the dreaded Asian carp, protecting the lakes from invasive species is a never-ending challenge. But much progress has been made. 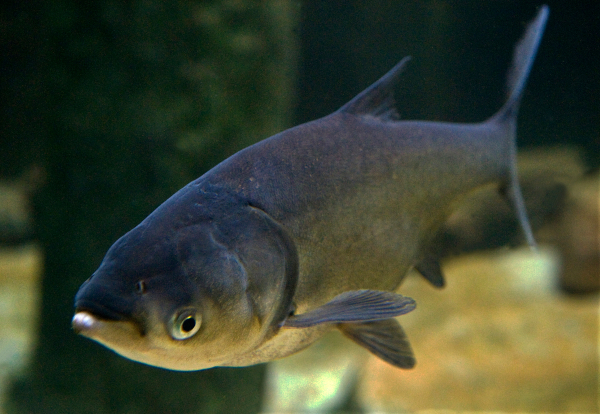 Fishermen were pulling up lake trout and whitefish with gaping bloody wounds and strange tentacles seemingly hanging from them. Upon closer inspection, the tentacles were sea lampreys, a primordial eel-shaped beast with a suction cup mouth ringed by sharp yellow teeth and a rasping tongue, used to scrape the scales off fish and then suck their blood.

It was like something out of a horror movie.

The economic and cultural devastation sea lampreys soon wrought across the Great Lakes was equally horrifying. Fish stock that family commercial fishing operations had relied on for generations were being decimated. Meanwhile without larger fish to prey on them, invasive alewives proliferated, choking the ecosystem and covering beaches most summers in stinking piles of dead fish.

More than half a century ago, sea lampreys were the first invasive species to create major problems in the Great Lakes, after traveling from the Atlantic Ocean through canals built to circumvent Niagara Falls.

“In 1921, the first one was spotted in Lake Erie,” says sea lamprey scientist and historian Cory Brants, a researcher at the U.S. Geological Survey Great Lakes Science Center in Ann Arbor, Michigan. “From there the Great Lakes is one big flowing system. They had free rein of the entire Great Lakes Basin, and they didn’t waste their time.”

“Commercial fishing families were already trying to make ends meet, they’d made it through the Great Depression, then World War II, and then sea lamprey came.”

Scientists worked together with fishermen to understand the sea lamprey’s strange life cycle and spread, and figure out where it would be most vulnerable. They experimented with more than 8,000 different chemicals — often placed in pickle jars with sea lamprey larva — in an effort to find one that could kill sea lampreys without harming other organisms. Eventually they found TFM, a lampricide that kills sea lamprey larva buried in the mud, without doing other harm.

Today the population is under control, thanks largely to ongoing strategic applications of lampricide in the rivers where sea lampreys spawn.

But that’s the exception. Many more problematic invasive species have come in their wake. In all there are more than 180 invasive species of plants and animals in the Great Lakes. The ones with arguably the most devastating impact are much less frightful-looking than sea lampreys: the tiny zebra and quagga mussels, which are believed to have entered the lakes in the late 1980s in ballast water from ocean-going ships. Past invaders from ships are estimated to cause more than $200 million in damage annually.

Innocuous as a single mussel may appear, they decimated the base of the food chain with their prolific filter-feeding on plankton. While the water appears more beautifully crystal-clear because of the mussels, that change means less food for native fish, harmful algae growth and other pernicious changes. Meanwhile the mussels cause major damage to drinking water and power plant water intake structures, as they encrust underwater surfaces.

“Thirty years after the zebra mussel invasion, we’re still coming to grips with what the effects are,” says Marc Gaden, legislative liaison for the Great Lakes Fishery Commission. “It changed everything. Whereas sea lampreys are top-down predators, killing grown fish with wounds that are very obvious, zebra mussels are a little more insidious. They are at the bottom of the food web, and their impact ripples throughout the ecosystem. If you don’t eat plankton, you eat fish that eat plankton, and zebra mussels are pulling the rug out from under it.”

Protecting the lakes from invaders in ballast water

There’s no putting the toothpaste back in the tube; once invasive species establish, they are usually here to stay. But the Alliance and other advocacy groups working with elected officials have made sure the Great Lakes are far better protected from invasion than they were a decade ago.

Since 2006 when a federal district court ruled that ballast water should be covered under the Clean Water Act, the Alliance and allies have worked hard on legislation and policy to implement the requirement. After years of contentious negotiations over regulations, in 2018 the Alliance scored a major victory: federal legislation ensuring that the EPA continues to oversee ballast water regulation, that stricter standards can be developed for the Great Lakes, and making sure all cargo vessels that ply the lakes are subject to clean water standards.

On another front, Asian carp — specifically bighead and silver carp — colonized many Mississippi River tributaries after escaping from fish farms along the Mississippi River in the 1990s. For years they’ve threatened to enter Lake Michigan through the manmade waterways near Chicago that connect the Great Lakes Basin to the Mississippi River Basin. So far, these dreaded fish have not established populations in the Great Lakes. After five years of study and a major effort by the Alliance, last year the federal government delivered a plan to build massive new Asian carp blockades on the waterway system.

The Obama administration recognized Asian carp as such a serious threat that it created a team of federal agencies to focus on the issue. In 2009, Asian carp eDNA — or loose DNA in the environment — was found in the Chicago River, close to Lake Michigan and beyond any barrier that would block the fish. This sparked rounds of state-on-state litigation, as well as intense monitoring of the fish’s progress toward Lake Michigan that persists today.

The Alliance advocated for separation — severing the artificial connection between the Mississippi River and the Great Lakes — as the only way to truly prevent the spread of Asian carp and other invasive species. The connection was made with the famous reversal of the Chicago River more than a century ago.

“Dozens of government officials, scientists and advocates like the Alliance see separation as the preferred protection for the lakes, but it is fiendishly complex to make happen” said Joel Brammeier. “Thanks to years of hard work, we have a plan for building real protections for the lakes that Congress and the states are ready to get behind.”

Even if the Great Lakes are protected from invasives entering through ballast or from the Mississippi Basin, managing the ones already here is an ongoing challenge.

“Invasive species are the number one example of why prevention is so important,” Brammeier notes. “Because once they are here, there’s no turning back the clock. We can’t undo the damage. Paying for prevention is always money well spent.”