We’re making progress on cleaning up the toxic legacy of the past, when the Great Lakes fueled the industrial heartland. But new threats are emerging, calling for new solutions. 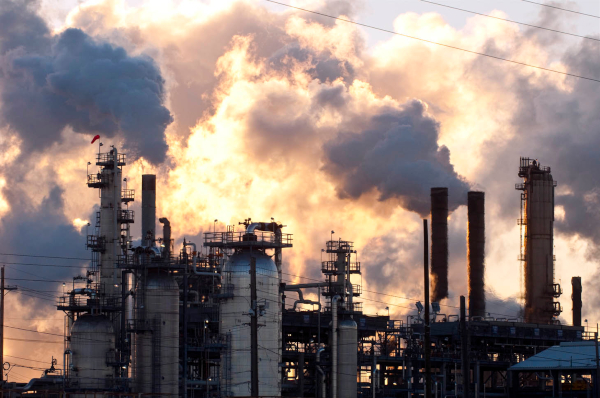 From the industrial revolution onward, the Great Lakes region was a thriving hub of industry thanks to the lakes and rivers that allowed easy transport of goods and raw materials, and water for industrial processes. By the 1960s, as a result, the waterways were also laden with toxic waste, much of it settling into the sediment, from steel mills, factories, tanneries, breweries, paper mills, coal plants, and countless other industries.

Lee Botts founded the Lake Michigan Federation in part to demand an end to the contamination of the watershed, and to force the cleanup of past toxic pollution. This goal became especially important as the region’s heavy industry was declining and emerging economies — recreation, tourism, and cleaner industries like advanced technology, education and health care — depended on rivers and lakes as amenities to attract people.

In its early days, the Lake Michigan Federation focused heavily on the creation and implementation of the Great Lakes Water Quality Agreement. In 1987, as part of that agreement, the U.S. and Canada designated 43 Areas of Concern (AOCs) in the Great Lakes that held dangerous pollutants and could not support recreation, or habitat for wildlife. The biggest need was the removal of copious amounts of the toxic sediment that keeps releasing carcinogenic and neurotoxic heavy metals, PAHs, PCBs and other compounds into water and wildlife for decades.

The AOCs include the Grand Calumet River emptying into Lake Michigan just southeast of Chicago, where an industrial menagerie of steel mills, oil refineries, pharmaceutical manufactures and more contaminated the sediment with PAHs, PCBs, oil and grease, and heavy metals. Green Bay, Wisconsin, and the Fox River that leads into it were rife with PCBs and other contaminants from paper mills, particularly from the making of carbon-free copy paper. White Lake, Michigan, in Muskegon County near Lake Michigan, was deeply contaminated from years of dumping by a tannery and chemical company. And Presque Isle Bay on the southern shore of Lake Erie was laced with PAHs and heavy metals from steel mills, a foundry and other industry.

Cleaning up toxic sediment is a laborious and expensive job, involving expansive testing to find where pollution is worst, then physically removing massive amounts of contaminated sediment, drying it and transporting it to and storing it in secure facilities.

When Cameron Davis became executive director of the Lake Michigan Federation in 1998, the AOCs were a major priority.

“These AOCs had been languishing,” Davis recounts. “We had all the right policies in place, we knew what we needed to do scientifically, we just didn’t have the resources to kick these cleanups into high gear.”

As the country headed for the 2000 presidential elections, Davis remembers, public support for Great Lakes cleanup was accelerating. Davis volunteered to work with Congress to craft a plan. With close allies including Congressmen Vern Ehlers, Republican from Michigan, and James Oberstar, Democrat from Minnesota, they ultimately drafted legislation and Davis proposed a name: the “Great Lakes Legacy Act.”

“The title had two meanings,” he explains. “We wanted to rid the Great Lakes of these legacy pollutants and thereby leave a stronger, more vibrant legacy for future generations.”

Testifying before a congressional subcommittee in 2001, Davis noted that almost 15 years after the designation of AOCs, only one had been delisted, in Canada. “Contaminated sediment is not a glamorous issue,” he testified. “But therein lies the danger of this problem. It is one that continues to permeate the Great Lakes. It is one that continues to permeate the health of the people in the Great Lakes. And because it is not glamorous and does not really get front page attention, it makes it all the more important that we do something about it.”

Another thing caught Davis’s ear. Some representatives contended that the country couldn’t afford to fund the bill because there wasn’t enough money. “Yet here we were in the middle of the largest economic expansion in world history,” Davis recalls thinking while at the witness table. “It was a great lesson that, as advocates, we have to be diplomatic and determined.”

In 2002, President George W. Bush signed the Great Lakes Legacy Act. The EPA worked with groups on the ground to assess the needs, develop cleanup plans and begin the hard work of removing decades’ worth of contamination. But the process was still frustratingly slow.

The organization was poised to channel that frustration into accelerated progress for the Great Lakes. In 2004, with unanimous approval of the board of directors, Davis transitioned the Lake Michigan Federation into the Alliance for the Great Lakes. And, in 2008, as president and CEO of the Alliance, Davis was back testifying before the same subcommittee, again working closely with Reps. Ehlers and Oberstar, making the point that only one of the American AOCs had been cleaned up. More funding, more flexibility and other changes were needed to jumpstart the cleanups and keep them going long into the future, Davis and others argued.

The success of the Legacy Act was the foundation for the Great Lakes Restoration Initiative that President Barack Obama signed and Congress began funding in 2009, a sweeping measure that included ongoing funding for toxic sediment removal as well as habitat restoration and other goals. Even in our current highly polarized political environment, the initiative has continued to enjoy strong bipartisan support from Congress, with funding of more than $3 billion since inception.

In 2013, Presque Isle Bay on Lake Erie became the second American AOC delisted, and in 2014, White Lake and Deer Lake in Michigan were also delisted.

Management actions have been completed on multiple AOCs stretching from Waukegan Harbor and the Sheboygan River on Lake Michigan’s western coast to the Ashtabula River on Lake Erie to the Rochester Embayment on Lake Ontario.

The Canadian government also has a program to clean up Areas of Concern, developed in cooperation with the U.S. Canada has cleaned up and delisted AOCs including Collingwood Harbor and Severn Sound on Georgian Bay. Five AOCs are joint U.S.-Canadian efforts.

In all, the Great Lakes Legacy Act has meant the cleanup in the U.S. of 4.3 million cubic yards of sediment, with $362 million in federal funds spent on cleanup. Those funds have also leveraged $251 million in non-federal spending from state, county, municipal and private partners since under the act, the federal government matches non-federal spending in a 65%-35% split.

New types of toxic pollution are threatening the Great Lakes today. Non-point-source pollution including agricultural and urban runoff create toxic algal blooms and other health and ecological threats, as discussed in the next blog in this series. And other types of industrial and consumer waste are also a problem.

Among them, microplastics — plastic from straws, bottles and other items that break down into tiny pieces — are being consumed by bottom-dwelling organisms and fish. These plastics can absorb chemicals, so consuming them passes the chemicals up the food chain. And harmful bacteria can grow on them, making them a conduit for this bacteria to potentially affect humans or aquatic organisms. Microplastics have even been found in cormorant chicks who get them through regurgitated fish from their parents. About 22 million pounds of plastic enter the Great Lakes each year, most of it in Lake Michigan, according to the Rochester Institute of Technology. Microplastics are found in drinking water drawn from the lakes, and even in beer. If plastic breaks down into even smaller pieces — nanoplastics — it can enter the bloodstream of fish and of humans. Last year Illinois Gov. J.B. Pritzker signed a law mandating the state EPA examine the impacts of plastics in water on human health.

PFAS, or per- and polyfluoroalkyl substances, are also a major concern. These are manmade chemicals — sometimes called “forever chemicals” — from non-stick cookware, waterproof fabric, packaging and flame retardant that don’t break down in the environment, or the human body. They’ve been found in water bodies, groundwater and drinking water across the Great Lakes region, and states have developed regulations and response plans. But even as some harmful PFAS are phased out or banned, replacement chemicals are also raising serious concerns. And there’s little understanding of the exact impacts of many chemicals, though in general they are known to cause kidney or testicular cancer, fertility problems and other impacts.

PFAS and microplastics in drinking water drive home that our dependence on the Great Lakes doesn’t stop at the water’s edge. “There are real, serious threats to the health of countless people who never visit the lakes but depend on their water every day,” notes Joel Brammeier, Alliance president & CEO.

Lead pollution in drinking water is another serious health threat, and a pressing environmental justice issue, in cities across the Great Lakes, most notoriously in Flint, Michigan. Lead in drinking water comes from archaic water service lines, and is another signal that people in this most water-rich part of the world still cannot count on safe water in their homes and businesses for their families and friends. That’s just not sustainable.

Past successes can inspire future solutions

As challenging as newer toxics are, the past offers hope. If we could successfully tackle decades of contamination that happened before society was even aware of the dangers, then we can address threats emerging in real time.

Davis says the Great Lakes Legacy Act and related work should continue to be an inspiration: an historic achievement that shows the potential for bipartisan cooperation and long-term thinking. That same attitude will be required to solve things like PFAS, microplastics and failing pipes.

“These Great Lakes helped deliver this country through two World Wars, through different economic downturns,” fueling industry and providing jobs that benefitted the whole country, Davis muses. “It’s our time to give something back to the Great Lakes.”